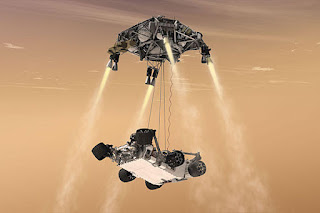 As NASA's Mars Rover Curiosity prepares to land on Mars, public audiences worldwide can take their own readiness steps to share in the adventure. Landing is scheduled for about 10:31 p.m. PDT on Aug. 5 (1:31 a.m. EDT on Aug. 6), at mission control inside NASA's Jet Propulsion Laboratory, Pasadena, California, USA.

Martian fans can help NASA test-drive a new 3-D interactive experience that will allow the public to follow along with Curiosity's discoveries on Mars. Using Unity, a game development tool, NASA is pushing new limits by rendering high-resolution terrain maps of Gale Crater, Curiosity's landing site, collected from Mars orbiters. A 3-D "virtual rover" version of Curiosity will follow the path of the real rover as it makes discoveries.

"Technology is making it possible for the public to participate in exploration as they never have before," said Michelle Viotti, Mars public engagement manager at JPL. "Because Mars exploration is fundamentally a shared human endeavor, we want everyone around the globe to have the most immersive experience possible."

For a cool, immersive view of Mars Rover Curiosity and other spacecraft, space enthusiasts can also use their Apple iPhones to access a new augmented-reality experience that "projects" 3-D images of robotic explorers for first-hand, up-close inspection. For those wanting a live, community experience, museums and civic groups worldwide are hosting Curiosity landing events, often with big-screen experiences and public talks.

"Multiple partnerships united around science literacy can really make a difference in reaching and inspiring more people around the world," Viotti said. "NASA welcomes innovative collaborations that inspire lifelong learning and access to discovery and innovation."
Information on all of these activities is available at: http://mars.jpl.nasa.gov/msl/participate . You can follow the Curiosity mission on Facebook and on Twitter at http://www.facebook.com/marscuriosity and http://www.twitter.com/marscuriosity .