VENUS 2012! From our Astronomy Club here in Kustavi, Finland


Kustavi, Finland
On this picture you can see 3 different phases of Venus throughout the month of May 2012.
These shots of Venus were taken with a SkyWatcher 8" Reflector on a HEQ5 mount. The Synscan GO TO, Camera Canon 550D + Positive projection T-adapter. 4mm eyepiece and Barlow x2.
All in all we stood at x500 of magnification.

The seeing is not the sharpest, but you can still see the spiky crescent ends at each phases.
On this photo you can clearly see the planet getting bigger (or closer to us). Theses pictures of Venus are all the same size with the telescope configuration.

The bluish colors of the planet is due to the set up on my camera with "white balance" set to Tungsten (+/-3200K). Also you can notice that the last crescent of Venus of the picture has a bluish background, this is due to the brightness of the dawn at this period of the year.

Not many days to the last Transit of Venus of our time. Be prepared and get your Venus-glasses (Sun filters) on time and Enjoy the spectacle.
Here is a good Photo guide that shows you in pictures how to protect your eyes and your equipment from the Sun.


Posted by S. Lamoureux No comments:

This week end - May 20, 2012
As the Annular Solar eclipse hit between Asia and America, Those of us who can not see the eclipse are still having eyes on Venus.
On May 20 18h35 UT, Venus will be at Phase 0.085, standing below 10% of illumination. This wide crescent viewed in telescopic view is impressive. We at the Astronomy club here in Finland we have followed Venus throughout the Spring time up to here. It is fascinating to see the changes in Size and in Shape of the Planet viewed by us here on Earth.
Here is the link to see the Computer simulation of the Phases of Venus in any given day of the year.

In a personal note I watch Venus through our mobile Skywatcher 200p/ HEQ 5/ Canon 550D and different kind of eyepieces. Maximum of Magnitude 500x (BarlowX2-4mm eyepiece-T ring Canon 550D). For those of you who has a telescope, now is the time to stare at the most brightest spot in the sky. Before Sunset look to the west and search for the first "star" to appear. This will be Venus. Set your finder scope manually on Venus and work your way up to capture beautiful moments in time.
Here is the most recent picture of Venus I took on the night of May 15 2012. The disk was a thin crescent shape of +/-13% of illumination with a diameter of 47,4". Picture bellow.
Annular Solar eclipses, Planet phases and transits, Comets, Meteor showers or Galaxy viewed through a telescope. The Universe is moving and buzzing around us. The possibilities are infinite (in our personal life-span).

The annular phase will be visible from the Chinese coast, northern Taiwan, the south of Japan, and the western part of the United States and Canada. Guangzhou, Taipei, Tokyo and Albuquerque will be on the central path. Its maximum will occur in the North Pacific, south of the Aleutian islands for 5 min and 46.3 s, and finish in the western United States.

So Please people have your telescopes, cameras and your filters ready and take as much pictures as possible. Us at the Astronomy Club in Southern Finland there is no chance to see it, but with your photos and pictures of the Annular Solar Eclipse, we will be part of it as well.
Good luck and clear skies!

Wikipedia: Solar eclipse of May 20, 2012
Global circumstances and animation HERE
Posted by S. Lamoureux No comments:

The last Transit of Venus visible to people of our time will occur  in less than 25 days. This spectacular event will be followed by many around the globe, Are you one of them? And do you want to get involved?

Here is a video-teaser of a group of people doing a documentary on "our last transit of Venus". The film project is led by Lightcurve Films (lightcurvefilms.com), and currently counts with the collaboration of Anton Stoelwinder Produkties (antonstoelwinder.nl), Interstellar Studios (interstellarstudios.com), Windmill Film (windmillfilm.com) and Museum Boerhaave in Leiden, the Netherlands (museumboerhaave.nl).

As Steven Van Roode explains it "We are preparing a documentary film project around the event and on this channel you can find related videos. The film will highlight three groups of people: scientists who will observe the Transit to study Venus and exoplanets, amateurs and students who will redo the experiment of determining the size of the Solar System and professionnals and/or amateurs historians with the intention to observe the Transit with 18th and 19th century instruments."


our last Transit of Venus (teaser) from Lightcurve Films on Vimeo.

We are looking for further film production partners across the world and people from the three groups described above. Feel free to contact us about the project if you are interested to collaborate (tov2012@lightcurvefilms.com).
More information on the Transit of Venus 2012 and links to many other websites can be found on transitofvenus.nl

The transit of Venus project is part of the Astronomers without Borders programme
astronomerswithoutborders.org
Posted by S. Lamoureux No comments:

Carnival of Space #248 @ DEAR ASTRONOMER Check it out! 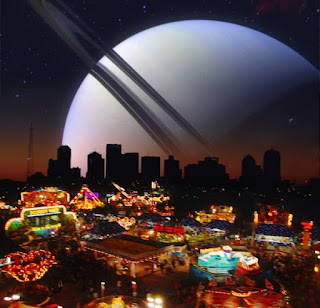 If you’re interested in looking back on the Carnival of Space, here’s the complete list that we have on UT or the archive to all the past Carnivals of Space. If you’ve got a space-related blog, you should really join the Carnival. Just email an entry to carnivalofspace@gmail.com, and the next host will link to it. It will help get awareness out there about your writing, help you meet others in the space community – and community is what blogging is all about. And if you really want to help out, sign up to be a host. Send and email to the above address.


Posted by S. Lamoureux No comments:

Over the last months, At the Astronomy Club we have observe Venus to catch it's phases before the big day of the Transit on June 5-6.2012. The picture on the left shows 2 phases of Venus. We have the smaller "half-dot" that is Venus at 65% of full and the bigger crescent is Venus at 26% of full. These two observations of Venus are taken 2 months apart. The "half-dot" is taken on the 26 of February 2012 and the bigger crescent is taken on May 1 2012. You can clearly see the difference in the phases.
It was very nice to observe the changes in the phases of venus on it's own. You really get the feeling that it is true, and not only in the books.

The Phases of Venus result from the planet's orbit around the Sun inside the Earth's orbit giving the telescopic observer a sequence of progressive lighting similar in appearance to the moon's phases.
It presents a full image when it is on the opposite side of the Sun. It shows a quarter phase when it is at its maximum elongation from the Sun.
Venus presents a thin crescent in telescopic views as it comes around to the near side between the Earth and the Sun and presents its new phase when it is between the Earth and the Sun. Since the planet has an atmosphere it can be seen at new in a telescope by the halo of light refracted around the planet.

The full cycle from new to full to new again takes 584 days (the time it takes Venus to overtake the Earth in its orbit). The planet also changes in apparent size from 9.9 arc seconds at full (superior conjunction) up to a maximum of 68 arc seconds at new (inferior conjunction). Venus reaches its greatest brilliancy (magnitude –4.5) when it is an intermediate crescent shape at the point in its orbit when it is 68 million kilometers away from the Earth (a combination of its closeness and the fact that it is 28% illuminated).

Until the day of the Transit, that is in 31/32 days. We have the chance to picture Venus in it's thin crescent phase and see it grow in size.