Personal observation of Omega Centauri in the Sahara desert, Morocco
At location 30 degrees North and 5 degrees West, Omega Centauri rose at 8 degrees above the horizon  just before the Sunrise. In the desert, the conditions where ideal. Transparency 7/10 (Sand particules and Sunrise), Seeing 9/10, temperature: +6C. I used a Meade 400mm / 2000 mm with focus reducer of 6.3 and a Canon 550D at prime focus. First I look at it through an eyepiece of 32mm and saw it very nicely and detailed. Then took the camera and started to make practice shots to center it and focus it well. As my window of opportunity was closing, I shot away a series of photos. Every now and then (I mean every 2 minutes) I check to see if the focus was ok and if the telescope was still following the object adequately. I manage to get a few pictures including the one you see at the top. I was very pleased with this session, and what a feeling to be outside by my own and listening to the camera snapping photos and looking to the horizon and imagining my self inside Omega Centauri and visualizing the night sky bright and full of stars. It was fantastic!

Northern hemisphere watchers don't give up! Canadians set example.
Omega Centauri is essentially a Southern hemisphere Globular cluster, but Northern sky watchers down of 42 degrees have the opportunity to have a look at this superb object in the night sky. Here is a fabulous article of Canadian observers who has had a glimps at Omega Centauri. Please read the article HERE

Core of Omega Centauri (NGC 5139)
Colorful Stars Galore in the Gigantic Star Cluster Omega Centauri.
The Hubble Space Telescope snapped this panoramic view of a colorful assortment of 100,000 stars residing in the crowded core of a giant star cluster. This is one of the ﬁrst images taken by the new Wide Field Camera 3 (WFC3), installed aboard Hubble in May 2009, during Servicing Mission 4.
The image reveals a small region inside the massive globular cluster Omega Centauri, which boasts nearly 10 million stars. Globular clusters, ancient swarms of stars united by gravity, are the homesteaders of our Milky Way Galaxy. The stars in Omega Centauri are between 10 billion and 12 billion years old.
The story of stellar evolution is depicted by the wide variety of star colors and sizes within this image of the globular cluster. Most of the stars in this snapshot are yellow white, like our Sun. They are adult stars that are shining by hydrogen fusion. The bright orange, red, and blue stars represent the ﬁnal, flashy stages of life for Sun-like stars. All of the stars in the image are cozy neighbors.
The average distance between any two stars in the cluster’s crowded core is roughly 13 times closer than our Sun’s nearest stellar neighbor, Alpha Centauri. Although the stars are close together, WFC3 can resolve each of them as individual stars. If anyone lived in this globular cluster, they would behold a star-saturated sky that is roughly 100 times brighter than Earth’s sky.
Omega Centauri is among the biggest and most massive of some 150 globular clusters orbiting within the Milky Way. It is one of the few globular clusters that can be seen with the unaided eye. The cluster resembles a small cloud in the southern sky and might easily be mistaken for a comet (Source). 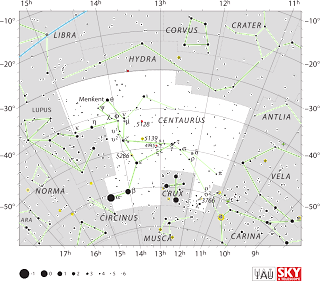 Conclusion 7/7 of astronomy trip to Morocco. Hope you have enjoyed! Goodbye.
About Astronomy Club Toutatis
Posted by S. Lamoureux